I registered for the 24 Hours of Moab today. check out my teampage. I thought that since I registered today, I’d post what I wrote shortly after last year’s race. 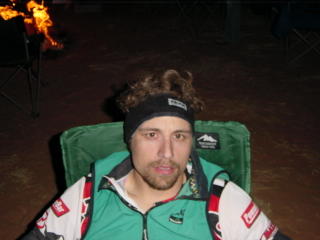 Well I completed the race. I finished 11 laps (165 miles) in 24 hrs 30 mins. I missed the goal of 13 only by 2 laps, but I realized pretty early on that 13 was a bit out my range. However I am pretty pleased with 11. I learned a lot about solo racing and what things I can do better to prepare, as well as things I can do better during the race. Overall it was a great time, and I am looking forward to doing more of these crazy all night slog fests.

Now for a race recap.

As per tradition, the race started with the le mans style run, where each teams lead riders all line up and when the guns goes off…..we all sprint out to a bush and then back to the long rows of bikes, find our bike, jump on and off we go with 500 of our closest friends out into the Moab desert. My plan was to take the run easy. No use going into the red in the first 2 minutes of a 24 hour race. So I set off at a moderate pace, made my way around the bush and got to my bike with still a lot of the field behind me. I had done the le mans run before, when I was on a 5 person open team, so I knew what to expect, but there will always be something completely strange about running through the desert with 500 people wearing helmets and spandex.

The first lap went smooth. I felt good as I battled my way though the rocks, sand and many other riders. The first lap of the 24 Hours of Moab is always a screaming fast mad house as each team, including Solo’s try to get the jump on the competition. As I headed out on my second lap I think the euphoria and rush of the race started to fade, and the shock and overwhelming sense of “oh crap” started to set in. For about half the lap I was fightin leg cramps, which I have never gotten on a bike before, as well as a lightheadedness that any enurance athelete should be familiar with as one of the first signs of major bonkage. Luckily I rolled into camp and was able to get some food and drink in me, stretch out the legs and head out on my third and fourth laps feeling a lot better about what the next 18 hours would bring.

Something I never even thought about before the race, but found myself dealing with, was the fact that I was always being passed by other racers. I didnt realize that seeing the team riders blow by me would be such a difficult thing to cope with. My first instict of course was to try and chase down every rider that passed me…that would have been stupid and led to an early exit I think for me. It is just the racer instinct to beat everybody, whether they are in your class or not, so it took me some time to adjust to all these guys going by me at a pace that under normal circumstances I would have had no trouble keeping.

After my fourth lap I stopped for a quick dinner, and got the lights hooked up on my bike. Let me just say right now that my Nite Rider Blowtorch performed flawlessly. Lots of bright white light to help me pick my way through what is a very technical, and in many spots pretty dangerous course to ride. As the sun went down I dug in for the long and lonely night. Riding at night is an amazing thing. It’s just you and a small pool of light in a sea of cold and dark. Even with 500 other riders out on the course, there were several times where there was nobody in sight. I would glance behind me only to see endless blackness, and in front of me was nothing but rock, sand and the familiar faint glow of the reflective course markings. The only sound was my own breath, and the click click of tires rolling over rock and sand. The quiet of these times would quickly and suddenly be swallowed up as a group of riders would come blazing by me, there breath heavy in the cold night air. Occasionally one would say something like “Way to go Solo, keep on rolling” and I would find that I could ride a little bit faster for the next few minutes.

I wasnt totaly without company at night. I rode large parts of a few laps with other Solo riders. We talked about our strategies, our goals, how we were feeling. We mostly talked in short sentences. We were tired and didnt have the energy to elaborate a lot. The company was good though, and I enjoyed spinning with guys who, in some cases were much better riders than me, some of them as far as 4 laps ahead, others as far as 4 laps behind. It really didnt matter.

Around 5AM the wind picked up. It was both a good and a bad thing. I knew it meant that the sun was getting ready to creep over the La Salle mountains and that within a couple of hours daylight would once again shed some light on this race. But the wind was cold. I was cold. I pulled into camp, drank some hot soup and warmed by the fire for few minutes. As I set off on another lap I felt good as I knew that before I finished it, the sun would rise and the long night would be over.

I was pedaling up the final climb of the loop when the sun broke over the mountain. The climb is a 2 mile or so ascent up a gradual dirt road. Really its an easy climb. No rocks to hop over, no lines to pick, and no sand to hike through. It is one of my favorite parts of the course. It is the last bit of effort before the long and rewarding descent into camp. I felt particulary good at this moment. I heard my name called from behind. A friend, riding on a 5 Person open team came spinning up from behind. His team, along with the other 3 teams that were racing from the local shop race team, were all camped together where I was at. It was a great camp, with incredible support. He rolled up happy to see me, and eager to find out how the night had gone. Good, I told him, but I was really happy to see the sunlight at last. He remarked that it was a beautiful morning. It really was.

I was climbing up the same stretch of road when 12 Noon struck. The race was over. I knew now all I had to do was coast in to the start/finish area and clock out. I came through the camp area, and like the citezens greeting home war hero’s, the many riders and support crew were lined up along the final stretch cheering for thier teamates, and anyone else who was finishing the race. I felt really good rolling through there as people cheered for the Solo guy. I was only 1 of 60 or so Solo riders. I didnt contend for the lead, I didnt have any screaming fast laps. Other Solo riders tore past me in the night….but I slogged on. I rode to the start/finish tent, logged out and realized that I had loved every minute of every lap. Yes, even the laps that I was cursing the ground I was hiking over, or even the sand that was filling my shoes.

As I said, I finished 11 laps. I see ways now that I could have been a bit faster. But I will save those things for next time. For now I am just going to enjoy the fact that my first 24 Hour Solo race is done, and hope that the feeling comes back in my palms and my toes.

Also, this entire race would have been impossible if it were not for my wife and my sister. They were there with whatever I needed, whenever I needed it. They get a gold star for thier efforts. Jeff from Mad Dog Cylces was also a champ, keeping my Fuel 100 rolling smooth for all 24 hours. And all the crew who were there to support the other Mad Dog Teams also get stars for thier encouragement and support. Although the category is listed as “Solo” there is no way anyone can do a race like this alone.